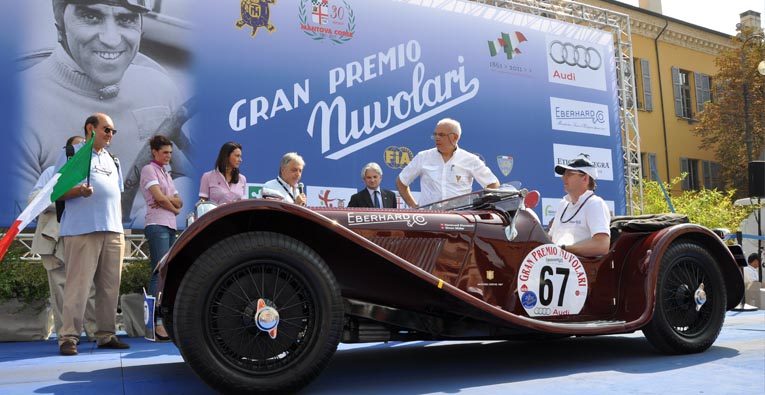 More than 300 crews from all over the world to honour the unforgettable myth of Nivola.
95 the pre-war cars at the start.

Mantova – Everything is ready for the start of the 29th edition of the Gran Premio Nuvolari, the most technical race in Italy. From the 20th to the 22nd of September, the international world of classic cars will converge in Mantua – the town in which the Gran Premio starts and arrives. Cars of timeless charm will arrive to celebrate the myth of Tazio Nuvolari: the sportsman who more than anyone else has marked the history of the twentieth century.

This year a record number of presences is expected: more than 300 crews are getting to Mantova, from Europe, Asia and Australia. 17 countries will be competing: Argentina, Australia, Austria, Belgium, France, Germany, Japan, Great Britain, Italy, Luxembourg, Holland, Poland, Czech Republic, Republic of San Marino, Russia, Spain and Switzerland. 45 car manufacturers are represented: from the Italian Alfa Romeo, Maserati, Fiat, Lancia, OM and Ferrari to the British Triumph, Jaguar, Aston Martin and Bentley; from the American Chrysler and Chevrolet, to the German Mercedes, BMW and Porsche, finishing with the French “purebred” Bugatti. 95 pre-war cars will take part in the event.

The Gran Premio is a unique opportunity to get a close-up view of these legendary vintage cars that have made the history of motor racing worldwide. These masterpieces will meet, as every year, in Piazza Sordello for one of the most fascinating races in the world. The myth of the great “Nivola” is always strong and present: it relives every year, thanks to the many enthusiasts who share the emotion of an extraordinary journey aboard real historic masterpieces of mechanics and design.

“Tazio Nuvolari is a world-renowed idol and an icon of our city, a myth that we should be able to exploit more and more”, adds Mattia Palazzi, Mayor of Mantova.

Organized by Mantova Corse, the regularity event is reserved for historic cars built between 1919 and 1972, according to the F.I.A., F.I.V.A., ACI Storico and ACI Sport regulations.

The details of the 29th edition:

Presences: with over 300 crews from all over the world, of which 6 are female, the foreign presence stands at 65%, confirming the success of the Gran Premio Nuvolari format, organized for 29 years by Mantova Corse with experience and professionalism.

Tazio’s car – the legend: Nuvolari’s car will symbolically open the event, with the number 1 aboard the Alfa Romeo 6C 1750 Gran Sport, the mythical car with which the flying Mantuan won the Mille Miglia in 1930, after a head to head with Achille Varzi.

Also this year Miki Biasion – the legendary rally driver, twice world champion, Brand Ambassador of Eberhard & Co. – will return to the GPN with the number 197, driving an Alfa Romeo 1900 C Super Sprint of 1956 next to Mario Peserico, CEO of Eberhard Italia.

The Gran Premio Nuvolari is organized in partnership with the Municipality of Mantova, the Automobile Club Italia and ACI Storico and is part of the calendar of Mantova Città Europea dello Sport.