Chat with us, powered by LiveChat Skip to main content
Wishlist 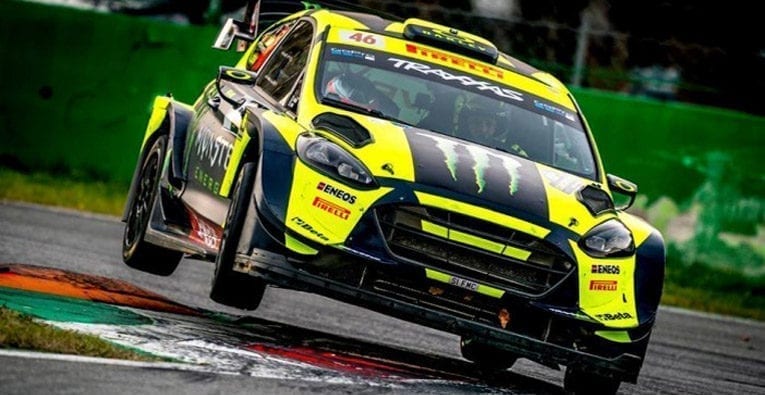 Monza Rally Show 2018: Rossi takes seventh win but champion Tony Cairoli fights and defeats Valentino Rossi in the Master Show.
“The Show Must Go Hard” is the slogan chosen for the 40th edition of the Monza Rally Show. Held this year from Friday 7 to Sunday 9 December at the Monza national circuit, another great show took place … 120 cars competed on the circuit, of which 23 were historic, providing three days of pure adrenaline. The Monza Rally Show owes its success to the perfect mix between professional rally drivers and bikers and drivers of other categories as well as stars from the world of entertainment. The name which more than any other continues to attract the crowds is, of course, Valentino Rossi, in a Ford Fiesta WRC Plus, followed by Tony Cairoli, at the wheel of a Hyundai i20 WRC 1.6, while among the “pure” rally drivers was Ford’s official WRC driver, Teemu Suninen.

MONZA RALLY SHOW: VALENTINO DOMINATES
With four wins in a row: 2015, 2016, 2017 and now also 2018, Valentino Rossi did not leave anything to his opponents this year and with the repeating successes in the special stages, he took home his 7th win in the Monza Rally Show. On Sunday the “Doctor” also gave his best by distancing his opponents, even if there was no lack of controversy for him (but in fact for all the first four classified) due to the use of a much higher category car (WRC PLUS) than the normal WRC.
After three days of races, Valentino came first, beating Suninen by more than a minute. The Brivio brothers came third, while finishing fourth was Uccio (Alessio Salucci), an old friend of the Doctor’s. The WRC 1.6 challenge was won by Tony Cairoli who, by 8 tenths of a second, finished ahead of Bonanomi.

MASTER SHOW: CAIROLI WINS
After the controversy we mentioned came the moment of revenge. Valentino and Tony both competed in the Master Show and this time it was Cairoli to gain victory in his Hyundai i20 WRC 1.6. The final was truly heart-stopping with Valentino taking the lead in the first laps but, thanks to a perfect and error-free race, Cairoli managed to close the gap and claim victory, despite driving a car with about 80hp less. Honour therefore must be given to the champion Tony, who never doubted that he would win in the end. In the other challenge, the one dedicated to the WRC Plus, Rossi beat the rally driver Teemu Suninen – victorious once again. But the MONZA RALLY SHOW never disappoints and the competition in the minor and historical categories was also fantastic.