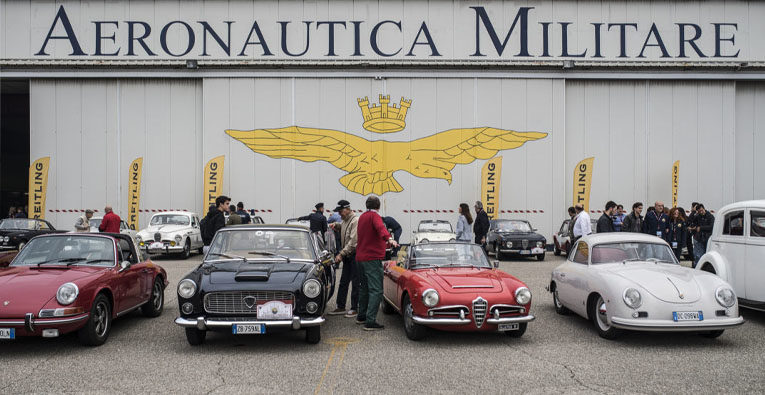 Just a few days to go until the thirteenth edition of the “Trofeo Milano”, the touristic event dedicated to pre 1970 vintage cars and motorcycles.
Parades, skill tests and a real open-air museum will await fans and the curious on Saturday 5 October 2019 at the Castello Sforzesco.

Organized by the C.M.A.E. (Club Milanese Automotoveicoli d’Epoca) in conjunction with the city of Milan (and with the sponsorship of Lombardy Region), “Trofeo Milano” is identified as the annual and long-awaited event reserved for cars and motorcycles of historical importance.
A race, an exhibition and a live show will take place thanks to the participation of vintage car enthusiast, engines designed to always stimulate special emotions.

The Thirteenth edition will begin on October 5th, while on Friday (October 4th) the scrutineering checks, and assignment of participation numbers and documents.
Once again, this year, the meeting and departure of the event will be located in the Hangar, made available by the Air Force located within the military area of Linate Airport.

The “Trofeo Milano” event is attended by cars and motorcycles prior to 1970, which boast a particular historical value, capable of giving fans and the curious the opportunity to make a real “jump into the past”, where every detail, from vehicles aesthetics, to the sounds produced by them, is charged with the precious value of by gone days , It emphasises the glory of the past that, despite the incessant race to the future, must not and never should be forgotten, and certainly will not be, thanks to the C. M. A. E. and the 120 participating vehicles (80 cars and 40 motorcycles).

For sure it is a relatively large number which responds, this is not only due to logistical reasons, but also a sympathetic selection of cars and motorcycles, testifying a thoughtful and careful organization of the event, that ensures its uniqueness.

A meeting place for fans? Not only! The “Trofeo Milano” event brings together vintage cars but it also provides for them some speed and skill tests that will take place on the road (closed to the traffic for the occasion) that runs along Linate airport.

Enthusiastic Chases, skilful overtaking and braking tests and so much more, with historical equipment characterised by a rigorously classic taste: for example, digital chronometers are banned in favour of the dear old-fashioned clocks. Remember, on October 5th, we will be in the past!

During the race, moreover, the now famous “photo hunting” will take place: a fun initiative which involves mainly navigators, co-drivers and passengers, and which sees the “recovery” of some photographs’ of which details are given to each participant at the time of departure. It’s about the details, that will then be immortalized in a spirited challenge encompassing car and engine shots.

At the “Trofeo Milano” event, the start times of the vintage cars and motorcycles will be staggered by 15 minutes. Motorcycles will start at 9.15 a.m. After a short lunch break in Pioltello, the “centaurs of the times that were” will leave for Milan where, early in the afternoon, at around 3:00 pm, they’ll reach, as usual, the Sforza Castle.

About half an hour later, the cars will arrive at the Castle, where the race start is set at 9.30 am. The Historic cars will not leave at the same time, but at 30 seconds intervals. Vintage cars will travel along secondary roads for about 60 km, enjoying the Lombard countryside up to Villa Maggi Ponti, in Cassano d’Adda (MI), where participants will stop for the lunch and then join the motorcycles at the Castle Sforzesco, which has been transformed into a real museum, for the occasion.

Cars and motorbikes will end their journey there, placing themselves within the perimeter of the square so as to make themselves available to view for the people present, they will be supported by experts ready to explain all the fascinating facts about the cars and motorcycles.

Among the selected vehicles, belonging to owners at Trofeo Milano, there will be very rare pieces such as , the Bianchi S9 ambulance, known for having carried Mussolini: historical vehicles from the Second World War which really impress the audience, this all bares witness to one of the darkest footnotes of our Country history.

At the end the day, a delightful concert will be performed by the Fanfara of Italian Military Aeronautics, then there will be a dinner following the Winners awards procedure. For the last 13 years, the Trofeo Milano confirmed itself as a meeting point for all the enthusiasts of vintage vehicles, but the invitation is also for all people who are driven by the desire to know and learn more about our roots and the historical Car and motorcycles that typify our florid historical period, which will always remain in the memory of those who lived it and in the heart of who, only at this present time had the chance to know it.